Do you ever miss Aberystwyth?

Quite often. I've not visited in some years now, and I have friends there still, but I can never seem to find the time. But yeah, I really miss it sometimes. You?

Ask me anything http://formspring.me/comicsdude
Posted by Joe Glass at 05:24 No comments:

Ask me anything http://formspring.me/comicsdude
Posted by Joe Glass at 05:24 No comments:

Can you quote one lyric that inspires you, and why?

One which has recently been inspiring a story that I am writing at the moment is by The Irrepressibles, from the song In This Shirt.

Are you looking forward to TRON: Legacy 17th December? http://www.youtube.com/watch?v=SPFpcKm0B7U

Yes, which is perhaps a little odd as I barely remember the original

In the cinema the chairs only have 2 armrests but unless your on the end of an empty row, you have other people's arms either side of you. Which armrest is yours?

Umm, the right hand one.

If you were to film your own version of Carpool ( http://llewtube.com/ & shown on Dave Thursdays 20:30 basically Robert Llewellyn offers an interesting celebrity a lift and films the conversation ) who would you have in the passenger seat?

Me. Because I can't drive.

So I just found this while looking around on Thingbox (people there post the most awesome things). I found it utterly adorable. Really sweet but also a lot of fun (even if it does have a lyric about getting gang raped).
Posted by Joe Glass at 06:17 No comments:

So, this past weekend I attended the Thought Bubble one day comics festival in Leeds, UK. With me I had the ever creative and ever English (except when he's Welsh) PJ Montgomery (I am NOT his sidekick), and later in the day I was joined by the incredibly talented Gavin Mitchell and his missus, Leanne (lovely girl).

The idea behind going was not only to have a weekend to just geek out at the awesome comics, fanboy gush over creators and generally spend all my money on all things comic books. No no, the idea was also to meet up with various creators we'd been getting to know, network and schmooze and maybe even spread the word on our comic, Stiffs (and maybe a little of The Pride too).
So really, it was a mix of business and pleasure, and you know what, it was rather brilliant for both.
(I also had to pick up some Christmas presents for myself from my mother, to be wrapped and given back to me on Christmas Day. What I managed to get was an original page by Marc Ellerby for his Phonogram: The Singles Club story and a canvas print of a cutesy Batman by Dave Evans Illustration) 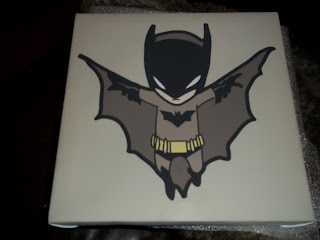 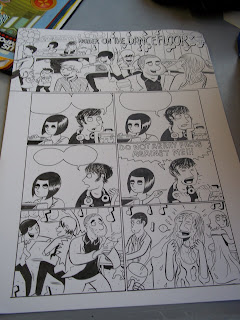 Merry Christmas to me! 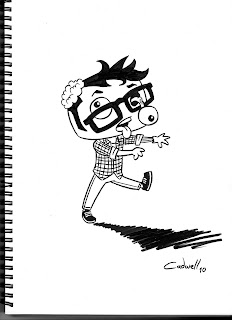 At this point, the group kind of split up for a bit, but not before Gavin showed me the full six pages for a The Pride story, that will hopefully be the first The Pride story available for everyone to check out. The six pages looked fantastic, and I really think that anyone who picks up the comic when it's done will be totally wowed by the fantastic work Gavin is putting into it. If only my words can live up to those pages!

During this time, me and Paddy continued exploring and doing some fanboy style stuff, mostly getting sketches or signatures (I sadly only managed to get two sketches, Adam's and an excellent Generation X's Chamber sketch done by Becky Cloonan). Then, it was time for me and Paddy to get interviewed. 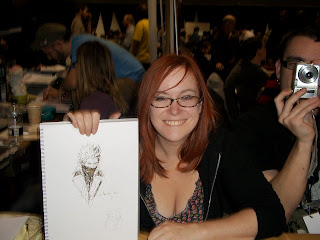 Becky Cloonan with her skecth's of 'Generation X's Chamber she did for me.

Yup, we were interviewed by Sidekickcast guys about Stiffs. It was a little weird, being interviewed about a book that wasn't out there yet, but also totally cool too. As soon as I hear anything about when that interview is available for listening, I'll let you know.

Meeting back up with Gav, we dived back into the con to continue signature hunting, before the day finally drew to a close. The day was totally fantastic, really useful and fun for us in terms of what we were planning and want to do with our comics.

We checked out the afterparty in the night too, meeting up with the guys from Dead Star Publishing, and meeting new people as well, in the form of April Nash and Rhiannon Lucy May. In fact, I cannot possibly recount the host of new people I met (as my memory for names is pretty dire, plus I was pretty drunk by this point).

But the afterparty served to exemplify again exactly how I felt about the con and the UK comics scene: it's a community. And one I loved, and I embrace, and oh my god, I have found my place! It's awesome. I mean, anywhere I can be stood at a bar, listening as the theme to Quantum Leap comes on and then wind up having a huge conversation with a random stranger girl about QL and how exactly did it end, is an awesome community in my book.

We sadly didn't get much time to dance to awesome DJ sets being let out through the speakers, as our train back to Huddersfield was fast approaching. So after mingling at Warp Speed and saying a quick, slurry, drunken 'Hey!' to Adam, Marc and Howard, mine and Paddy's Thought Bubble 2010 was over.

Or sort of, anyway. End of the day, we met a lot of cool new people, got out a lot of info about the comics to such people, and also learned a great deal which we can now work on in our own efforts to get something out on that scene, and properly become a part of that community.

The biggest thing I think we learned is to stop freaking out about our comics and getting them out to publishers etc. To just try it, to put stuff out on our own terms, whatever that may be, and see how it goes. Learn from the mistakes, but have the courage to make them, and to realise that a comic as an artefact of art can be anything, whether it be a glossy American styled floppy, to a photocopied table napkin with a narrative. It's just a matter of DOING IT and putting it out there.

So thanks to everyone we met at Thought Bubble 2010, and thanks to the organisers for putting on a great show! Look forward to seeing you all next year, and hey, maybe next time we'll have a table too.
Posted by Joe Glass at 05:43 No comments:

Can I have a tenner please?

Depends what it's for :P

Ask me anything http://formspring.me/comicsdude
Posted by Joe Glass at 13:25 No comments:

Ask me anything http://formspring.me/comicsdude
Posted by Joe Glass at 13:25 No comments:

Which writer working in comics today would you most like to collaborate with on the book they currently write?

Ooooh, a good one. Umm, hard to say. I have loads of ideas for the X-Men, and so I guess Matt Fraction and/or Kieron Gillen would be good for that. I'd love to do something with Warren Ellis, but his awesomeness would overshadow, rape and eat my own (not necessarily in that order). Neil Gaiman would be fun to write a tale of humanity with. But I guess I'd really love to work on Green Lantern with Geoff Johns too

Ask me anything http://formspring.me/comicsdude
Posted by Joe Glass at 14:56 No comments:

Ask me anything http://formspring.me/comicsdude
Posted by Joe Glass at 14:52 No comments:

Ask me anything http://formspring.me/comicsdude
Posted by Joe Glass at 14:51 No comments:

If you could ask George W. Bush one question what would it be?

Would you rather be a famous musician or a famous actor?

What was your favorite toy to play with as a child?

My Power Ranger toys I remember most, but I used to be a huge Transformers fan before that.

Would you rather swim in a pool or the ocean?

When you were a kid, what did you want to be when you grew up?

In order: a mad scientist, an astrophysicist, Buffy, a comic book artist, a teacher, a writer (especially of comic books)

If you could ask God one question what would it be?

Do you have any scars on your body? If so, how'd you get them?

Tattoos are scars, you want them too? I have a scar on my belly where my appendix was taken out, and then five tattoos.

Sometimes I think Aberystwyth. I have a lot of fond memories there. But probably somewhere warmer

If you had the opportunity to live one year of your life over again, which year would you choose?

The year I went to study in America. I'd stay there longer, and I'd stay in better contact with the friends I made there.

Which comic book artist, past or present, would you like to work with more than any other?

Oooh, a toughy. I have a list as long as my arm, and many of them know as I've alread messaged them about it lol. Right now though, I would love to work with Joe Quinones. Love his style.

What celebrity would play you in a movie about your life?

How would you describe your personality?

Positive. I try not to let bad things get me down. Sometimes this is kinda unsuccessful, but I never stay down long.

Who's the most talented person you know?

God, I know so many, it wouldbe hard to think of any singular person as most talented. I can say I'm jealous of all of them!

What's the best place near you to get a pizza?

Have you ever been fired? If so, why?

Never been fired, sorry. I do my best at whatever I do.